Welcome. Let me pour you a cup…

Whether or not you subscribe to the desert island pen mindset, if there was one — and only one pen to take and use from here to well… let’s say, eternity — the decision would most likely be either fairly straightforward or incredibly difficult.

Whichever the case for you, on my side of the desk, this particular Sailor 1911 goes a long way towards making the decision pretty easy. Put simply, it is a fantastic pen with an exquisite nib, and is routinely one of the first re-inked and most often picked up — particularly for longer form writing. So at the current time, would probably be the one packed for that one way trip.

I’ve written before about my good fortune in receiving a number of pens from a kind reader downsizing their collection. The subject of this review is one such pen, which I have now owned for about 12 months.

As far as the overall styling is concerned, the Sailor 1911 Large (or Full-size as is the moniker these days) in black and rhodium at least, has a classic, office executive type look, yet retains a certain contemporary sleek as well.

I do own a number of black fountain pens, and acknowledge a cigar shaped black and rhodium pen may be considered boring by some. To me, they are things of beauty, though of course we all have our own styling preferences, and yours may differ with mine on this one.

Although gold coloured accents have a certain appeal, as you can gather, I generally prefer rhodium or silver contrast to my black pens, and this particular model ticks all the boxes, from the nib right through to the top-most decorative ring on the barrel, which itself is matched by the clip ring, bookending the black resin body nicely. The slimmer rhodium ring adjacent to the thicker branding one on the cap is then matched by another at the threads on the section. The branding ring itself carries the Sailor Japan Founded 1911 inscription, clearly giving away the heritage from which the 1911 series derives its name.

Onto the nib itself, which sports a decorative braiding pattern at its perimeter, along with the 1911 insignia, Sailor’s anchor logo, and the 21K and 875 gold designations.1 To delineate the Naginata Togi nib from other versions, an “N” is found on the nib’s left shoulder, along with the “MF” (Medium Fine) nib width of this particular model. The overall beauty of the nib is a great match for its writing ability — that I can guarantee.

So how does the pen feel in the hand after giving it the once over and writing begins? For me personally, the answer is just about perfect, both from a size and weight perspective. At 122 mm (unposted) the barrel has enough length to provide scope for a higher or lower grip on the section, which I will vary at times during lengthy writing sessions.

I’d describe the overall diameter as mid-sized, and very comfortable. The section tapers just a little from the unobtrusive cap threads towards the nib, before flattening out and flaring again ever so slightly — exactly how I like them. On tapered sections which continue right through to the nib collar, I generally feel my fingers are constantly sliding towards the nib, so prefer a flattening of the taper, or even better, something providing that little bit of feedback to my index finger saying: “things stop here”. 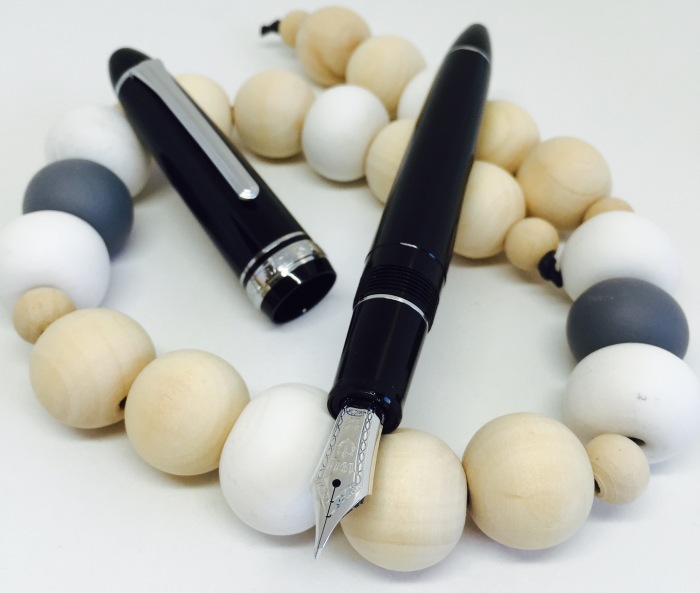 So in general, this is an extremely well balanced pen, with enough heft to use without posting the cap (as I do), however depending on your own particular preference or perhaps hand size — could be used with the cap posted. Interestingly, I have been coming back around to posting a few more of my mid-size pens of late, and I put it down to more frequent use of fuller size models such as the 1911 Large, and suspect my preferred size and weight sweet spot has now readjusted a little.

There are numerous nib offerings available with 1911 series pens, and although not all remain available, there are also a number of Sailor specialty nibs at your disposal — some examples of which can be found at Nibs.com.

I’ve mentioned above the 1911 Large is very comfortable to hold and write with, however it’s really all about the Naginata Togi nib as far as this particular pen is concerned.

The Naginata Togi nib is a member of the Sailor Specialty group of nibs, and as explained on Nibs.com:

Provides variable line width depending on the angle of the pen to the paper – the lower the angle, the broader the line. Available in Medium, Medium-Fine, and Broad

The variation in line width is achieved by a larger than standard amount of tipping material on the nib, which is ground towards a finer point at the tip, widening as it moves away from the actual nib point. Thus, as the pen is lowered towards horizontal, a greater portion of that wider tipping comes into contact with the paper and provides a thicker line. The opposite of course being true as the pen approaches a vertical position. To be honest there is not an overly large amount of line variation, and it is seen mostly on horizontal strokes when comparing near vertical and 45 degree pen angles.

In terms of what you end up seeing on paper — yes, there is some line variation evident through the positioning changes noted above, however it is not a nib designed to achieve graduated line width through pressure — nor is it really suited to changes in line variation mid stroke. Of course with some focused effort this can be achieved, however I think you can imagine the difficulty in changing from a near vertical pen position to 45 degrees or below mid stroke.

It is a reasonably firm nib, which I would describe as having a small amount of “give” however there really is zero flex. For standard cursive writing (about 45 degrees in my hand), the nib is an absolute dream. This small amount of give provides for an extremely comfortable writing experience, particularly when writing longer letters or perhaps draft blog posts about itself.

So where does the line variation of the Naginata Togi nib fit in with the average user? There are a few thoughts which come to mind here. More defined, deliberate writing, for example block printing, perhaps certain lettering types, or languages which use specific stroke widths within letters or phrases. I guess I am thinking along the lines of how one might use an architect ground nib or even your standard stub nib (which, as I’ve noted above, would be better options if a larger amount of line variation is required). One case where I have found the variation handy, is in marking up printed (or even handwritten) pages, and needing to “squeeze in” a few comments in a tight space between lines — vertical we go and those words fit right in.

While the ability to vary the line width is a fantastic option to have with this nib, it is the ability to pick it up and churn out a thousand handwritten words and having the last one as comfortable and enjoyable as the first is where it really shines. The biggest compliment I can give the Naginata Togi nib is that having a unique style of nib does not detract from the purpose I use most of my fountain pens for — medium to long form hand writing (which for me occurs with a fairly standard grip with the pen at about 45 degrees to the page). Of course it depends on the user, however I don’t necessarily think the same could be said about something like a more specific architect ground nib for example.

I say this not to suggest the Naginata Togi is necessarily a better nib than other specific types (which again, for line variation it isn’t), but merely to point out if you are concerned about applications for it — first and foremost (at least in my experience) you end up with an out and out fantastic everyday writing nib.

What you won’t end up with is a “jack of all trades” compromise, and I tend to pick it up just as much if not more (depending on what’s inked) as my Pelikan M805 — an exquisite 18k nib in its own right. So if you don’t intend to use the line variation capabilities much at all, and are simply looking to expand your nib varieties, I’ll say it again — you’ll end up with a fantastic everyday writer out of the deal. Although it is one of the cheaper Sailor specialty nibs (currently adding US$50 to the pen’s US$248.00 list price at Nibs.com), whether or not it is worth the cost is a matter for your budget and conscience I guess.

Not unique to this nib type, though certainly evident on this pen, is the pronounced “sing” it has whilst writing. A feature often described as a squeak or screech, there is a significant noise associated with the nib moving across the paper. More information on this phenomenon can be found on Richard Binder’s site, and is described as follows:

Singing is a harmonic vibration that occurs when friction between the nib’s tip and the paper causes the nib to “stick” and release repeatedly at the resonant frequency of the nib.

Although I’ve not written about resonant frequencies since my university days, I’d have to say in the current context, and given the way the nib writes — it is more music to my ears than annoying to the soul, and perhaps even adds a little more character to the experience of using the pen. I’d suggest it is also part of why I like the nib, most likely contributing to the ever so slight feedback it provides when writing. Whether or not this occurs with other Naginata Togi nibs I cannot say, however I don’t include comment here in a negative sense – more an observation.

The Sailor 1911 Large with the Naginata Togi 21k medium-fine nib. A long enough title in itself. What more can I say? This is simply a fantastic pen all round, and now sits beside the Pilot Custom Heritage 92 as a favourite in my collection.

I’m not someone who writes dozens of letters each week, however if you’ve received one from me in the past year or so, there is a good chance it was written using this Sailor 1911. Once picked up, it exists effortlessly in the hand, following every direction without fail, compromise or question.

If I’m still writing here in 30 years time, I’ve got no doubt many a draft will be written with this pen, however I suspect I might be angling it just a little closer to the page – I’ll be needing those thicker lines by then.