Regular readers may recall (and are perhaps a little tired of reading about), my participation in NaNoWriMo (National Novel Writing Month) last November, in which I managed to complete the goal of writing a 50,000 novel by month’s end. My continued posts on this topic are indicative of two things — one, it’s not entirely over; and two, as a prompt, my winner’s T shirt recently arrived.

My original plan to write a follow-up post in December failed to eventuate. Simply put, I needed a break from the whole thing. So now, in the official NaNoWriMo “Now What?” months of revision, editing and publishing, it is time for me to revisit the story.

Upon taking a break, I am now looking forward to hopefully improving on the original draft. Achieving the goal of 50,00 words did not come without a few learnings and realisations along the way, some of which I thought worth sharing.

I won’t go into any great detail here, as both the Digital and Analogue tools I used were covered in two previous posts. That said, a few other points I would add:

The Ideas – or lack thereof

Upon starting on November 1, I had ideas. In my mind (and transferred to a mind map) was a basic plot outline and the semblance of characters. Exactly where they would take me as the story progressed was another matter entirely. There were many times I ran into an idea block, however found the following to be of assistance:

Participating in a Creative Writing Challenge

I still do not have the answer to what made me think I had enough creative ability to undertake such a project. The argument here being anybody could — the difference? Quality of the output I imagine. In my case for the past 25 years, my writing has centred around the following:

As you can probably guess, my career progression has followed down the list, with my current role involving the last two points on a daily basis. Nothing in the list above strikes me as being overly creative in nature, however in some respects it is all writing, and involves planning, organisation, structure, and clarity of both thought and delivery.

The chance to write more creatively was likely one of the reasons I committed to the attempt. I am certainly not of the belief I have a “killer novel” somewhere inside me. I simply enjoy writing, and hopefully have a little talent, that with some practice, research and patience, I may be able to develop further.

Some additional points on this:

Although I posted a few word count updates to Twitter, and wrote the blog posts I mentioned above, in my physical world, only my family and a very small number of friends were aware of my participation as it was underway. 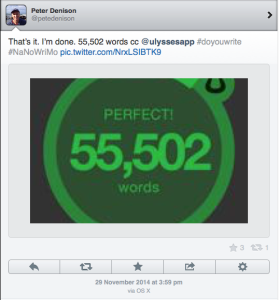 That would be – relief

The support received from my family was expected — to a degree, however went above and beyond, through extensive and unwavering words of encouragement; understanding at my constant desk-bound position; the expert editorial services provided by my ex-schoolteacher mother (a constant source of advice around some of those appalling gaps in my knowledge I mentioned earlier); and general excitement at the prospect of reading the finished product.

A little unexpected was the level of enthusiasm shown by the few friends also following along as the month progressed. Requests for word count updates; the “have you written today?” queries; genuine excitement at my synopsis and various plot “leaks”; and sincere requests for a copy to read once I was done.

It would be disrespectful to those involved to say the above was a complete surprise, however the enthusiasm shown by those supporting me (both family and friends) was touching to say the least.

Now that I have that first draft in my hand, it is time to revise and edit, taking into account feedback from those who have read the draft (and in my teenage daughter’s case, kindly made extensive margin notes — and I mean a lot!).

I am also in the process of taking advantage of the deals on offer through the winners page on the NaNoWriMo site, including a printed copy of the novel through Blurb, which is a nice bonus. Also, catching a glimpse of the online writing community was also an eye-opener, and from what I saw, it is a pretty impressive one.

I certainly have a reinvigorated respect for those I consider real writers. As far as I am concerned, I wrote the draft of a novel here, however most certainly do not consider myself any sort of creative writer — however one may be defined. This is perhaps something I need to think a little more about, and work a little more on, however on current form, my mind keeps returning to the following from a book review in The Guardian recently shared by Matt Gemmell (one of the real writers) on Twitter:

Finally, NaNoWriMo provided me with a fantastic opportunity to learn a lot about my creative talents, workflows, and how my tools work (or don’t) for me, in a deadline driven, fairly intense challenge. Learning just as much about myself in the process, I highly recommend NaNoWriMo if you even have half an inkling to undertake such a project — and perhaps you do have that killer novel inside you.

After all, it is for a great cause, and remember, although many are — you don’t even need to be a real writer.

2 thoughts on “NaNoWriMo – two months on”