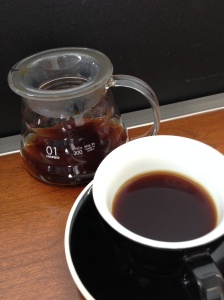 Flipping away through my cover stories in Flipboard recently, I came across an article which appeared on Quartz, titled Empire of the Pods: The world’s growing love affair with the most wasteful form of coffee there is.

It comes as no surprise the article lays a pile of landfill squarely at the feet of the “coffee pod” industry, for it’s wasteful cast off miniature plastic cups (commonly known as K-cups, after the Keurig company which popularised this form of brewing in the US) expelled from such machines all for the sake of one cup of coffee. Although not a new sentiment, the article goes on to note the staggering rise in popularity of the single use pod machines around the world, concluding with the following from Murray Carpenter’s book Caffeinated:

Then, not long after, an article with a similar sentiment and an interesting twist from the Coffee Contrarian, Kevin Knox, including this:

More than one green coffee importer (don’t worry, you shall remain nameless) privately refers to Green Mountain Coffee (now renamed Keurig Green Mountain) as “Greenwash Mountain,” and that’s certainly a succinct and accurate description of the company’s long-standing marketing strategy, using its sizable Fair Trade and organic volume to deflect attention from its actual main business: selling commercial coffee, much of it artificially flavored, in ecologically disastrous K Cups, to convenience stores and the like.

Knox also makes reference to this article on the topic from Mother Jones.

Grounds for outrage? Perhaps, however climbing up and looking over the large pile of cast off pods, why the increase around the world? 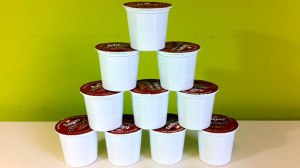 Consumer demand, convenience and willingness (or lack thereof) to hone their coffee making skills beyond pod in-brew-pod out. A judgement on those using such machines? Absolutely not. For every article lamenting the environmental negatives of pod machines, there are 20 extolling the virtues of the specialty coffee scene, the third wave explosion, the palate development and demands of the consumer. The discerning consumers mantra: “We know good coffee, we know where to get it, and we’ll let you know if you’re not up to scratch”. What else will we as consumers do? Seek out a “cafe level” coffee experience at home with everything from – “wait…what? That is a lot of clean up, I’ll just get a pod machine and be done with it”. 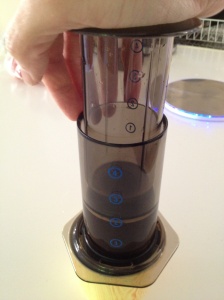 Incidentally, there are four people within arms reach of me at the office who use Nespresso pod machines, and a family member uses a slightly cheaper clone – without question the popularity of these machines has definitely risen, and will continue to do so given the (large) segment of the home coffee market they cater for.

Seen by family, friends and co-workers as a bit of a coffee nerd, I am often asked about my thoughts on whether pod machines are a worthwhile purchase, with the expectation I will frown on such machines. My answer is usually along the lines of: they are great due to their simplicity – if you want a machine that will make the coffee for you and involve minimal preparation and clean up. Not everyone wants to grind and then brew (whether through a machine or manually) their own coffee, and frankly most don’t. One of the simplest forms of brewing I use at the office is my Aeropress, which often attracts comments in the order of “gee that looks complicated”. In reality, a plastic tube, a piece of paper, coffee and water – to me so simple. To others, a whole lot of messing around.

Such practices are summed up by Marco Arment in a great post which provides some perspective on the obsession with pod machines:

We’re the ones who obsess over every little detail of brewing technique as if they matter much more than they really do, making good coffee ever more alienating and confusing to casual coffee drinkers who don’t have time to study and fuss over it as much as we do.

The post goes on to list many ways these obsessive brewing techniques may also impact the environment in certain ways, not to mention the added time taken to brew with such methods.

In addition, the comments in the article linked to above on the Coffee Contrarian are worth reading, which include a dig at independent roasters, possibly those who have the most to gain from an environmentally based rebellion against the Nestlé and Green Mountain behemoths:

Passionate small roasters would like to believe that being smaller scale makes for higher quality, but all it really guarantees is higher overhead, higher green coffee costs and other structural inefficiencies that the consumer ultimately pays for.

Interesting times ahead no doubt.

My thoughts personally? The environmental impact should always be a consideration in whatever we do, however I can’t help but think those who judge these pod machines from a supposed position of “superiority” regarding quality may be missing the point. Do I personally think the coffee I make is superior to that emanating from the spout of a machine after water has run through grounds in a plastic pod? Yes I do.

The reason I think this? Well, for one, the amount of time I spend selecting green beans, personally roasting, resting and correctly storing them. Brewing through many different methods (many of which are a little fiddly) at just the right time to maximise freshness and ensure the flavours are at their peak. When visiting coffee shops and cafés, I seek out those with good reputations amongst the coffee industry, perhaps embracing the so-called “third wave” brewing techniques and approaches. Does all of this make me biased? Absolutely, which is where perhaps knowing the effort I put into these factors makes me believe this must be better – right.

And whilst I do not believe the following to be true – What if it isn’t better? What if it is all in my head and I simply want it to be better, so my already biased beliefs make it taste better? After all, what do both the pod user and myself end up with? A cup of coffee – and I bet the pod user was enjoying theirs long before I had finished making mine.

One thought on “Coffee Pods, the environment, and fiddling”