In the latter half of 2016, a number of fantastic coffees come through my usual green bean supplier Ministry Grounds. This naturally processed Ethiopian certainly stood out, resulting in a repeat order for an additional couple of kilograms to go into the yearly festive blend given to family and friends at Christmas. There may have also been the expectation a little would be “left-over”, which I would have to take care of myself of course!

In relation to Shakiso and its surrounds, where the Kayon Mountain farm is located — Wikipedia tells us:

Shakiso is a town in Southern Ethiopia, in the Guji zone of the Oromia region, an area known for gold and titanium mining, along with native forests. Guji is bordered on the south by Borena, on the west by the Southern Nations, Nationalities, and Peoples Region, on the north by the Ganale Dorya River which separates it from Bale and on the east by the Somali Region. The highest point in this zone is Mount Dara Tiniro. Cities and major towns in this Zone include its administrative center, Negele.

Many outstanding coffees originate in and around Guji, and it is not uncommon to see many pop up in the offerings of speciality roasters as the season comes around each year. Generally, if you are looking for some berry flavours in your cup, just about anything from this region would be a great place to start.

The Kayon Mountain coffee farm is a local family-run enterprise with over 30 years experience in the production of Guji coﬀees.

The family’s rich experience has included many years of seed selection and nurturing of heirloom local varieties. Two spring fed nurseries are maintained to for the planting of seedlings in the loamy-clay soils of Kayon and coﬀee is grown in a semi-forest environment under native Acacia trees.

Here, things have been many and varied — from tasting and testing both filter and espresso roasts for the festive blend I’ve referred to above, to full immersion cold brewing, pour overs on ice, and the occasional iced latte (given the usual hot summer weather here in Brisbane).

As I’ve alluded to above, an Ethiopian naturally processed coffee was a good place to start when seeking some berry flavours for the annual festive blend. With this flavour the predominant aim, the Kayon Mountain comprised 60% by weight, with the remaining 40% a washed El Salvador — Finca Patagonia — providing deeper plum notes for the filter roast. For the espresso roast, the remaining 40% was shared equally by the Finca Patagonia, along with Guatemala Ceylan, which added a little more body and chocolate flavours. Overall, the blends were reasonably successful in achieving my aim regarding the overall flavour profiles, and feedback has been positive from those who received some at Christmas.

The Kayon Mountain brewed as a single origin? Equally well received, however I must admit most of the small amount remaining I kept for myself.

When prepared as espresso1, a lovely rich cup resulted, with strawberry and blueberry flavours, followed by a rich chocolate finish. With milk as a latte or flat white, again those berry flavours were at the forefront, and combined with a little chocolate, the overall profile resembled a Cherry Ripe.

Even if purchased with filter brewing in mind, it is certainly worth running through your machine as well, regardless of roast level. I honestly don’t think you would be disappointed.

With filter brewing2, a clean, crisp, full flavoured cup ensued, with flavours of red berries, a hint of blueberry and chocolate with a creamy, medium bodied, lingering finish. Most of my filter brewing was done using a V60, along with kicking off many a December morning in the office with the AeroPress — both providing equally impressive results. As you’d expect, the V60 produced a cleaner, more nuanced cup, however there were no complaints about the AeroPress brew, from either myself, or my office coffee pals Tracey and Andrea, whom I must thank for determining the final ratios for the festive blend.

Last but by no means least cold brewing. Although a couple of 1 litre batches were indeed “cold brewed” using full immersion over 16-18 hours (similar to this method), I’m also partial to hot brewing and flash chilling — using a V60 over a jug of ice. This method simply involves around half of your usual brewing water already in the vessel as ice, with the remaining half off the boil as usual for brewing a V60 (the dose generally being a little higher than what you might otherwise use). If you’re interested and have not yet delved into the world of iced pour over brewing, perhaps use this as a guide.

Depending on your preference, while adding milk to either of these chilled brews is an option, doing so mutes a little of the richer berry flavours. When consumed black (my first preference, with only one test cup consumed with milk), I’d have to say it was definitely one of the more refreshing drinks I consumed over summer. When you have four or five 200ml bottles of cold brew stashed in the fridge, it becomes mighty hard to limit consumption to a reasonable level on those hot days.

I think you get the idea. 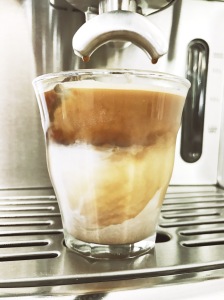 Iced latte at the ready

I have been quite taken by this fabulous naturally processed coffee from the Kayon Mountain farm in Ethiopia. Having been put through a wide array of brewing methods over the course of the past few months, it handled all with aplomb.

My preference — despite enjoying it across all forms of brewing is probably by filter, although the bias introduced by these long, hot days of summer probably push the cold brew into first place.

If you are able to get your hands on some, I for one highly recommend it.

This particular coffee from the Yirgacheffe region in Ethiopia originally came into my possession in September of this year, part of an order from Ministry Grounds, my usual green bean supplier. The coffee was quick to position itself atop the heap as one of the best of the year for me.

With an eye towards the 2015 “Christmas Roast” festive blend, I quickly added another kilogram to the next order in November.

The Dumerso mill is located within the Yirgacheffe region of the Gedeo Zone in southern central Ethiopia, bordered on the south by Kochere, west by the Oromia Zone, north by Wenago, east by Bule, and southeast by Gedeb (courtesy Wikipedia).

The Dumerso municipality has around 700 smallholders contributing their coffee, each bringing with them the unique characteristics of the areas heirloom seed stock

The Natural process involves the ripe cherries being delivered to the mill where they are sorted and graded, then placed onto raised drying beds in thin layers and carefully turned every 2-3 hours. 6-8weeks later, depending on weather and temperature, the beans are then de-hulled ready for export

I mentioned in the introduction this coffee quickly became one of the standouts for the year, mainly due to its great performance across virtually all of the brewing methods I prepared it with.

Upon opening the bag, and of course after grinding, the aroma was akin to plunging head first into a bowl of mixed berries, of which the majority were strawberries. This of course followed through into the taste as well. Given the 2 kilograms of green beans I had at my disposal, I was able to tailor the roasts for both filter and espresso brewing.

As espresso1, there was a fantastic combination of ripe berry flavours and raisins, with just a little chocolate. Also evident was a smooth creamy mouthfeel, medium body and long finish. Used as a base for a latte or flat white, similar flavours were again on show, with the overall combination somewhat reminiscent of a cherry ripe bar.

Lastly, amidst the afternoon office kitchen rush, the Aeropress3 again saved the day, providing enough of a pause to allow my enjoyment of a similar flavour profile. Although not quite as bright as the V60, that smooth creamy mouthfeel, strawberry, and jasmine on the finish again made for a very enjoyable cup.

So all in all this coffee was certainly one of the best for the year, and as a result contributed 60% of the “Christmas Roast” festive blend overall volume, in combination with a washed coffee from Honduras (El Tamarindo Horizontes) and a honey processed offering from El Salvador (La Esperanza).

Overall I was fairly pleased with how the blend turned out, a main aim being to keep the great Ethiopian berry flavours of the Dumerso at the forefront, whether brewing with an espresso base of through a filter.

I think you can probably tell I enjoyed this one, and it was nice to end the year on a high note from a coffee perspective.

Having now turned over into 2016 (and a happy new year to all), things have kicked off pretty well with my Third Wave Wichteln coffee arriving a couple of days ago — a beauty from ReAnimator Coffee in Philadelphia, kindly sent over as part of the exchange by Greg, a barista and trainer with ReAnimator. 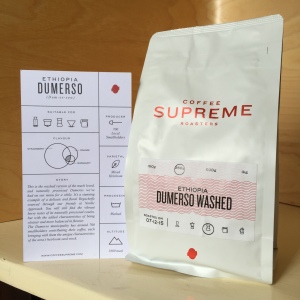 Speaking of the Wichteln, you might be able to guess which coffee I sent to Bonn, Germany to fulfil my part of the exchange. It was indeed the Yirgacheffe Dumerso, however this time the washed process coffee, roasted of course by the professionals at Coffee Supreme. Hopefully the recipient will enjoy it, and also (fingers crossed) the additional bag of my home roasted Dumerso Natural thrown in as well.

I’ll leave it there, except to say I hope your journey (coffee or otherwise) into 2016 begins well and continues — lets say for at least twelve months or so. Now I’m off to brew!

My intent when sourcing beans from Ethiopia is usually to find some luscious red berry flavours in the cup. With tasting notes of red berry, peach and apricot, this coffee from the Guji zone in Southern Ethiopia sounded pretty interesting, and definitely worth a try.

Guji is one of the zones in the Oromia Region of Ethiopia, named after a tribe of the Oromo people. It is bordered on the south by Borena, the west by the Southern Nations, Nationalities, and Peoples Region, and on the north by the Ganale Dorya River which separates it from Bale. To the east is the Somali Region.

The highest point in Guji is Mount Dara Tiniro, and the zone also contains its administrative centre, the town of Negele.

More on the Tade GG farm from Ministry Grounds:

Tade GG is a private, certified organic farm owned by Tesfaye Bekele. The farm is 221 hectares in area and lies between 1830 and 1950 meters above sea level. The landscape is characterised by sharp and rugged hills, ridges, plateaus, valleys and flats creating stunningly dramatic setting. The coffee is pulped, fermented for 35-48 hours, then washed and dried in parchment for 9-15 days on elevated beds.

Having roasted the Tade GG for both filter and espresso, each form of brewing was probably on par with the other — that is, very good, although not quite as rich in the berry and fruit flavours I had been expecting.

As a filter brew in the Hario V60 there were prominent flavours of candied berry, with a medium body, and a crisp, clean – though fairly short finish.

Brewing as espresso brought out a little more of the peach and berry flavours, with a fuller, juicier body, and smoother finish. As a flat white or latte, a little  increased sweetness was evident, with some mild caramel flavours peeking through as well.

Overall, the Ethiopia Tade GG was an enjoyable coffee, without reaching the heights in rich fruit flavours of neighbouring growing regions such as Yirgacheffe.

My pick would be as espresso, however I must admit to brewing a sizeable carafe through the V60 and sitting back in front of the football on the occasional weekend afternoon. It is September after all.