Depending on who or what you follow online these days, you‘ve likely seen NaNoWriMo (National Novel Writing Month) mentioned as the month of November approached. With things having kicked off on November 1st, the progressive daily word counts are now beginning to appear in my social media feeds. To those participating this year, I wish you every success, and to those “I’m already behind” tweets – where there is a will there remains hope – a thought which worked for me a few years ago.

While not diving into the full NaNo experience myself this year, I’ve decided to take a slightly different approach (though I’m not sure whether to suggest its an easier or more difficult one), and revise the 55k words I committed to pixel and paper in 2014. At the time, I wrote a couple of posts on the tools I used to get there, and a quick search of the term NaNoWriMo on this blog will pull up a few posts outlining how I managed to fall over the 50k word deadline before month’s end.

Memories of how November went in 2014 fall somewhere on a continuum between I never want to do that again and I wouldn’t have had it any other way. Where my thinking lies on that continuum varies day-to-day, however one thought always remained – I never quite finished it. Sure, the actual story or first draft is finished – it has just never been revised and edited. You know… finished.

Have I not had the time over the intervening three years to read, revise and improve on that initial effort? Absolutely. Just couldn’t do it. I even started a couple of times only to be thwarted by some innate inability to read my own work, let alone embrace the apparent enormity of the task.

So why now? A very good question, though perhaps not as good as the one which asks: what makes you think you can do it this time?. To be honest I’m not entirely sure I can, however in my own mind am a little more definitive about giving it a go this time. After all – I have a plan!

Three years on, the statute of limitation seems to have expired on those feelings of oh wow… I can’t read this, so away we go I guess. Besides, is it not the least I can do after having put my mother through proof reading and editorial duties the first time around?

Diving into a river of bad grammar, poor punctuation, and let’s face it – a somewhat dubious plot line and story structure requires some sort of plan.

I have 55,000 words over 32 chapters, so the common sense approach would seem to be about one chapter per day. With reference to my Tools below, I plan to make a first pass through each chapter making corrections and notations by hand, subsequently transferring those to digital form.

Being relatively confident I will get through the initial markup, my fear is becoming bogged down in rewriting and larger changes. Should this be the case I think I’ll leave any major section rewrites to a later time if things head too far in that direction (says he who sets himself up for failure: hmmm…yes, that’s too time consuming – I’ll just do that bit later…).

With reference to those previous posts about the tools used in creating the first draft, I might simply argue if it ain’t broke don’t fix it, however that would be oversimplifying things a little. The fact is I tend to proof and revise things far more efficiently and effectively in a very different format to what they were written in, and am of course far from alone in this way of thinking.

At the very least this takes the form of a text editor’s preview pane or say, Marked 2, in an entirely different theme to the editor pane itself. Better yet, with the physically printed word I am able to hold and manually scratch, scrawl, and mark up or annotate by hand. I don’t believe I am necessarily in the minority with this type of approach either, however perhaps a generation of digital only writers, editors and reviewers are now on the scene, and I would be considered a “throwback”. If not the case already, that time certainly cannot be far away.

In any event, given my reticence to get stuck into this task in the past, I’d suggest I am in need of selecting not only the best tools for the job, but those most likely to maximise my chances of success.

For all of the notebook and paper reviews I’ve done extolling the virtues of my favourite types, the manuscript is printed out on standard office copy paper. Yes I know – I thank you for your kind thoughts and commiseration, however do believe I’ll cope. Strangely enough, my previously abandoned attempt at this task found the paper – while nothing to write home about – certainly usable.

I cannot recall the pen I was using, however the J. Herbin Orange Indien ink feathered just a little, and demonstrates some show through, however I’m simply taking anything I can see through the page as a sign of progress. I’m here to mark up, and can see it’s mark up I’ve done – a positive approach I’ll run with as far as it takes me.

This time around, I’ve settled on Montblanc William Shakespeare Velvet Red, ably distributed by a Pilot Custom Heritage 91 and its FM nib. The Shakespeare is my most recent ink acquisition, and seems perfect for the task in that it isn’t too bright, yet stands out from the printed black ink. I’ll leave it to your imagination whether I’m perhaps trying to channel some other form of inspiration with this choice as well… 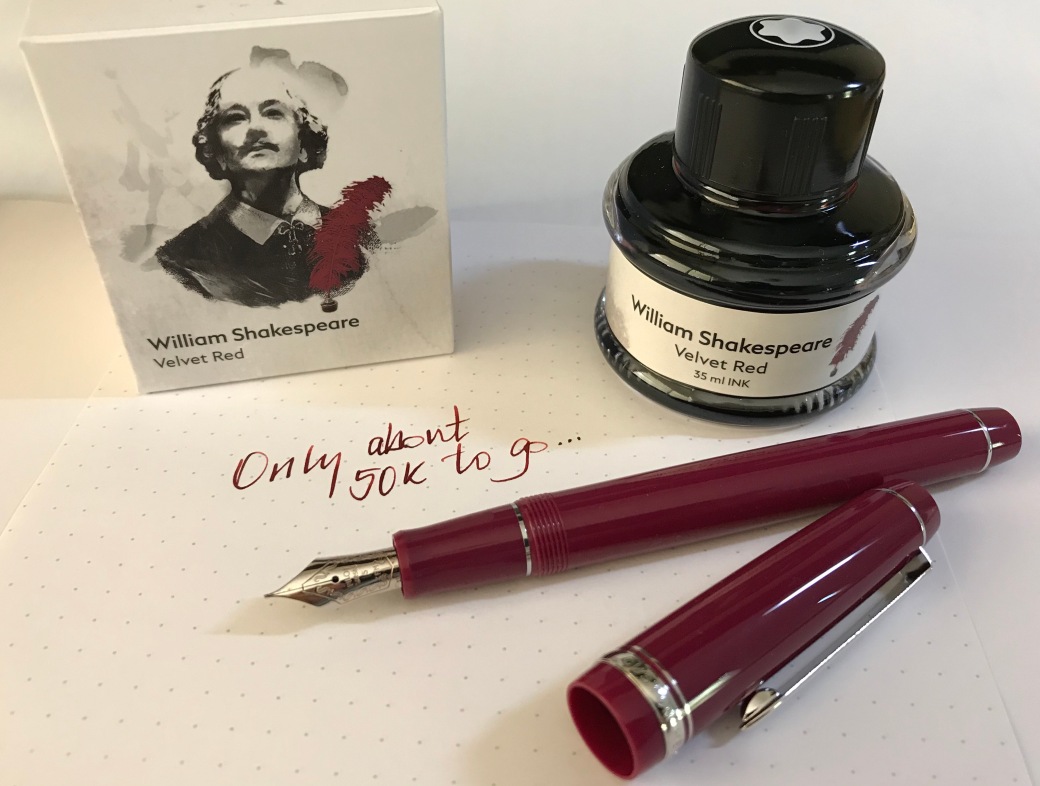 The pen? Well it really could have been any of a number of choices, though in the end the FM nib squeezes my corrections and notes in and around those tighter spaces, as well as minimising feathering given its relatively restrained ink flow. The maroon with silver trim simply seemed like a good fit for the ink colour – or perhaps I thought it would set a creative mood?

If I’m to make a permanent record of any of these planned improvements, a digital element to this process is rather important. The choice here was easy, despite the significance of throwing 55 thousand words in a text editor, needing robust iOS syncing (I’m using Dropbox), and trusting my hard work will be safe, saved and ready to go anywhere over the next 30 days.

You may be thinking I’ve said the choice was easy given my loyalty to Ulysses for writing over the past three years, however given the title of this section, clearly that isn’t what I mean. I began using Ulysses through the promo trial for NaNoWriMo back in 2014. Fitting then that I’ll be testing something different this time.

My reference to the choice being easy, simply relates to a recommendation from a very good online friend who has helped immeasurably in much of my Mac related development over the past couple of years. I still maintain the best thing to come out of this blogging caper are the people you become acquainted with as a result. So, when someone whose opinion you highly respect makes an app recommendation, I feel it is well worth trying out.

MultiMarkdown Composer’s Table of Contents based on header levels

Armed with the Pro version of MultiMarkdown Composer v4, I am ready to work through and make any necessary adjustments or rewrites. As you can see, I have dropped the text into a Markdown file, and MMC4’s Table of Contents provides me with a nice sidebar view of my chapters. Although arguably possessing a few less bells and whistles than Ulysses, MMC4 provides everything I need for the task at hand. It’s a robust and powerful text editor, and if that isn’t what I need for the task at hand then I’m clearly approaching this all wrong.

…he was actually editing his work

I’m also interested so see how the iOS Files app handles Dropbox syncing when I use Byword on my iPad to squeeze in a few updates at lunch time. A few days in I can report so far so good. It would however be remiss of me not to mention encountering more than a couple of Byword crashes when using Copied in split view on my iPad (Air 2 running iOS 11.1) putting this post together.

Enough talking, as the time to commence reading, critiquing and rewriting has already passed. I’ve indeed made a start, however am yet to convince myself that my will is strong enough to push on and get this done in a month. I’d like to at least think I can make one complete pass through with pen in hand – even if the rewriting comes a little later.

To all of those creative and motivated souls who’ve dived headlong towards the 50k word target, I wish you well. While its fair to say I have a certain reticence towards fully editing my first draft, I’m certainly glad I managed to create it.

Anyway – it can’t be that bad. My mother wouldn’t lie would she…?

2 thoughts on “This November is for Editing”