Oh yes, another [Insert best / worst or other appropriate adjective] of 2013 list for your reading pleasure.

If the first line of this post mocks a list of this nature then why create another of my own? A valid question, however my irreverent tone is only due to the sheer number of these lists currently circulating my Twitter timeline (many of which I have duly re-tweeted), RSS Feed and everything in between – the concept is one I have never really had an issue with. If anything, I find these types of lists to provide a reasonable summary of the year gone by, and often serve as a reminder to go back and check out those [again, insert appropriate item here] that were lost in everything else that occurred throughout the year.

The original draft of this post was in fact a very structured list format. In the end things became a little too regimented and lengthy. Hence, the end result is a much briefer, and hopefully less boring version of few things I enjoyed throughout the year. There is also a high likelihood I have left a few things out, though as I sit here and write, below are a few things that spring to mind from the past 12 months. All were not necessarily new in 2013 but are simply what I personally may have discovered in the past year, or used a lot more of over the same period.

A year of upgrades

A fairly major upgrade for the family in the latter half of the year was the purchase of a Mac Mini (Late 2012 Model; 2.5GHz Intel Core i5; 4GB RAM; 500 GB Hard Drive) as our home computer. I have particularly enjoyed the level of integration achievable with my iOS devices since firing up the Mac.

When Apple released the Retina display equipped iPad mini a little earlier than expected in November with somewhat limited supply, I managed to pick up my desired model (WiFi; 32GB; Space Gray) through the Apple on-line store.

Speaking of upgrades, I was quite impressed with the iOS 7 upgrade in September. OS X Mavericks was also released in October, though in itself had minimal impact for me personally, given I was learning OS X for the first time anyway.

Hit the link and check out the fantastic piece of design and function that is the Twelve South Hi-Rise for iPad mini / iPhone 5s, which looks great and performs perfectly on my desk.

A surprising addition here comes courtesy of Aldi, with what is probably best described as a shameless rip-off of the Jawbone design, this Bauhn rechargeable bluetooth speaker (sorry, couldn’t find a link) is right on the money. For the princely sum of $29.99, this speaker is exactly what I have been searching for, without having to pay in excess of $80.00 plus for the established “brand” models. It pairs like a champion and sounds great.

I have also enjoyed writing much of this post with my new Logitech Ultrathin keyboard mini. Although some touch typists may find the keyboard a little cramped, I find my decidedly unrefined four finger typing well suited to this device.

Well, where to start. There are numerous best of and must have lists of apps floating around. Many of which I have saved in my Pocket queue for later reading.

Firstly, for what it aims to do and ultimately does, 1Password is without peer on both iOS and OS X. If you do not use this app to create and store robust passwords, go and buy it now.

The integration of Fantastical and Siri on iOS continues to amaze me. The fact that I can simply tell Siri “I have a meeting with X at 9:30 on Friday at the Y” and have the exact entry appear in my calendar is brilliant. As I have previously mentioned , I continue to write 90% of my posts in Editorial for iPad, simply because I find the workflows immensely useful and the added features make this an outstanding app, worthy of its inclusion in the App Store’s Best of 2013.

Many of my favourite apps such as Omnifocus 2 for iPhone and Tweetbot 3 for iPhone received ground up re-designs for iOS 7, and I cannot praise the developers highly enough for what they have achieved here.

Many apps have also become integral to various workflows I have now set up, which are by no means complicated, but certainly work well for what I need. I have begun to utilise Drafts to create lists which I then send to an Inbox list in the native Reminders app, which are then automatically pulled into Omnifocus (with a task automatically created from each line in the original Drafts list). Again, the use of URL Scheme automation in iOS for examples such as this is pretty amazing.

I have also used Pinboard as a bookmark repository on an ever-increasing basis. Articles I save in Pocket to read later are, upon archiving, automatically sent to Pinboard with tags preserved by an IFTTT recipe.

Finally, I have really enjoyed using beautiful interface of Flipboard to read articles of interest. It is also a great way to scroll through Instagram or Twitter, and of course I have created a couple of my own magazines with articles I intend to refer back to as well.

Another great year for coffee in Brisbane. 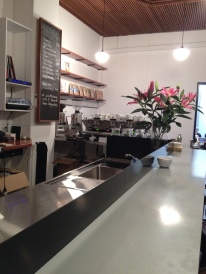 The opening of Strauss in Elizabeth Street brought a new class of establishment serving great food and specialty coffee in this fine city. I highly recommend a visit in 2014 if you have not done so already. Another venue just over the bridge at South Brisbane is also worth your time and taste buds – Merriweather Cafe.

The common denominator of the above cafés being the coffee served originates from Cup Coffee Roasters, which began in West End and has expanded to a larger roastery at Woolloongabba. It was here I recently attended a Brew Class, on filter based brewing methods which was a fantastic experience and highlighted how much I don’t know about such things.

For great Italian espresso, Bar Linea continues to be my mid morning saviour for a quick 10 minutes of solitude and a brain recharge.

My home coffee roasting (as regular readers will note) continues unabated, and I have been pleased with my overall set-up, which provides a fairly efficient way to go from green to roasted bean. I am certainly beginning to refine my tastes and roast profiles and look forward to seeing what comes through Ministry Grounds in the new year.

Although there will be no resolutions listed here, I do have some ideas about what I would like to make some progress on next year.

I plan on improving my home roasting skills and continuing to provide family and friends with some of the results – possibly recovering some costs along the way. I’d also like to visit a lot more of Brisbane’s great coffee hotspots, particularly those in the outer suburbs. I do not plan on reviewing these establishments, however will happily recommend visiting those that are of a high standard.

In the technology realm, I will continue to learn as much as I can to improve my iOS and Mac workflows, and in particular am keen to improve the organisation of my photo library. Probably the biggest achievement of 2013 was commencing this blog in May, and that is another area I plan to work further on. My initial aim was to sign up to WordPress, pick a theme and few widgets and focus on content, with the look of the site to be attended to later. Apart from registering a domain name, that is pretty much how things went, so it is probably time to put in a little more effort on the design front.

Most importantly, in 2014 I get to spend another year with my amazing wife and kids, of whom I am immensely proud of each and every day, and whatever I have (or think I have) achieved would not be possible without them.